The city of Ghent will not implement the plan to extend the existing LEZ area in the inner city to neighbouring living areas but is taking other measures to obtain better air quality.

The recent decision of the City Council to not implement the planned LEZ measure for 2025 was based on an ex-ante evaluation, that resulted in the following conclusions: existing UVAR measures (large car0free area in the city centre, traffic calming plan in the inner city based on the area-wide zone30 and traffic circulation avoiding through-car traffic and an LEZ) caused a substantial impact on air quality in the inner city. Also in the neighbouring districts the air quality improved because of the shift to cleaner vehicles – and what is more, the modal shift happened there, too.

It seems that the continuation of the current LEZ will lead to an accelerated decrease in NOX emissions and, with current assumptions, it is estimated that the drop of the NOX emissions that could have been achieved without LEZ by 2028, will already be achieved by 2025 because of the LEZ.

In addition, the drops along the urban arteries and  busy street canyons in the city centre are shown to be important: the expansion of the LEZ would not only lead to a particular drop of NOX in these types of streets, but also a substantial larger total drop of the pollutant itself.  On the other hand, the effects of the current LEZ and LEZ extensions on particulate matter concentrations will be very small in 2025 and will be even smaller in 2028.

For these reasons, the City Council concluded that the surplus impact of the expansion of the LEZ would be limited due to the country-wide trend of cleaner vehicle renewal and in particular in the wider Ghent area because of the LEZ introduced in the inner city in January 2020. The expected considerable social impact of an expanded LEZ in the lower income neighbourhoods around the city centre contributed to the final City Council’s decision. 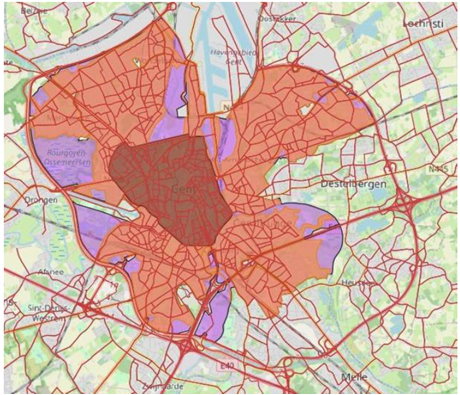 What will be done instead

The city will develop in five neighbourhoods, not coincidentally located outside the current LEZ, multimodal hubs for different types of (electric) shared cars and shared bicycles with a good connection to public transport, high-quality bicycle sheds and an accelerated roll-out of charging stations for electric vehicles. In the same neighbourhoods, the city will also abolish the right of a second resident card for on-street parking. Finally the city will also work more closely with the Public Centre for Social Welfare and poverty organizations to combat transport poverty. New subsidies will be budgeted for inhabitants as well as businesses to sustainable mobility investments e.g. the purchase of electric vehicles.

New UVAR measures will be taken in other areas: an inner city style traffic circulation plan will be implemented in a suburban residential area. A large industrial area in the southern part of the city will have to be developed without generating more car traffic than it already exists. Nowadays about 30.000 people commute to that area, mainly by car and the city wants to change that: more than 10.000 extra car trips will have to be avoided or shifted towards sustainable modes.

Not expanding the LEZ does not mean that the city of Ghent is losing the ambition regarding sustainable mobility development: new types of UVAR will continue to be part of the toolkit to obtain it, and more is to come.